Go “Back to the Future” with power-lacing sneakers!

If you thought Marty McFly was a fashionable young man, or enjoy adding technology to almost anything – you too can make your own sneakers with power lacing. Instructables user “blakebevin” has created a sneaker with a replica of the power laces seen in Marty’s Nikes in “Back to the Future II”. And doing it yourself isn’t that difficult at all. 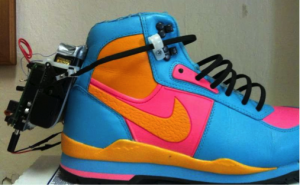 Attached to the back of the shoe is an Arduino board which controls two servos via an Arduino motor driver shield. There is also a force sensor inside the shoe which can detect the presence of your foot – and once detected the Arduino will activate the two servos which each control one lace. The amount of pull each servo can manage will depend on the external smoothness of the laces and the holes in the shoe.

Check out the laces in action during the following video:

Although just a proof of concept, moving forward to a wearable product is possible. There are a few challenges including the size of the battery and servos, however with the use of a much smaller Arduino-compatible board such as a LeoStick and possibly some smaller servos – the final product could become a reality. So to get started with your own version, visit the project page here: http://www.instructables.com/id/Power-Laces-the-Auto-lacing-shoe/?ALLSTEPS