In what can only be described as an exercise in using as much technology as possible, Rohit Krishnan has devised a remote-control system for a cheap toy car that demonstrates a variety of development tools. First – the control process… a PC accepts keyboard commands which are sent via Wi-Fi to an Android phone. These commands are converted by an Android app into audio signals – sounds – that are sent from the headphone socket to the Arduino.

Finally – the Arduino is programmed to decipher the audio signal into the original commands… at which point it executes them to control the car. Motor control is via a typical H-bridge IC – and can easily be replicated with an inexpensive Arduino motor shield from the usual suppliers. Over time this project could be modified to accept further commands – such as activate the camera when a certain condition is true, or send an SMS when the car cannot move out of a jam. 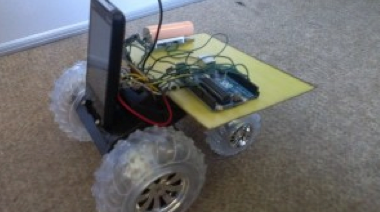 Some may say that this level of technology is overkill, and to the untrained eye it is. However another way of looking as it is to think of this as an excellent example of using the various interface and control methods. Either way, for more information and a detail explanation of all facets of the control system – visit Rohit’s blog here: http://rkrishnan.me/?p=343