Reginald – The surveillance robot controlled via the Internet

In what can be considered a fascinating, multi-function robot that can be controlled via the Internet – or a chilling imitation of a toy Terminator, this project is extremely  fascinating and one of the best we’ve seen for quite some time. Instructables user “n.fletch” has combined a typical robot platform with an Arduino, as well as a wireless router for network communication. On top of this is a live webcam for real-time vision from Reginald, as well as an infra-red illuminator for night vision, motorised toy turrets (his weapons!) and enough hardware to allow free movement. 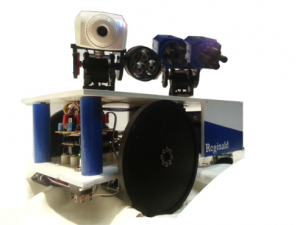 The beauty of this project is that Reginald can be complete controlled using the one interface via a processing-based GUI on a PC. Furthermore the communications are encrypted which blocks anyone from logging into Reginald’s IP address and taking over. Here is an example of controlling Reginald from the PC:

Finally, although this project doesn’t fall in the arena for beginners – the creator has documented absolutely everything you need to know to make your own version. From the hardware, code for various platforms, circuit schematics and networking know-how, it’s all available at: