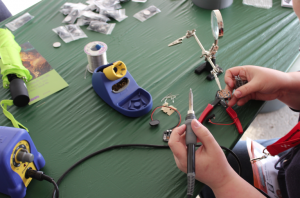 The Do-it-Yourself (DIY) ethos is nothing new. From ambitious homeowners that build and remodel their properties to punk rock musicians making low to mid-fi opuses on four-track recorders, to today’s gadgeteers determined to build tomorrow’s innovative tech products. While the DIY ethos isn’t necessarily new, it is making a massive comeback with regard to manufacturing and electronics.

The rise of DIY electronics projects is based around the idea that the average Joe can build an innovative tech product with nothing but some cheap microcontrollers, a few dollars worth of components and a brilliant idea. The DIY electronics movement is underpinned by the inventors’ spirit of trial and error and most importantly, satisfaction and enjoyment.

On the surface, Arduino is just a little circuit board with some programming capabilities. Beneath the surface it is a powerful electronics prototyping platform that developers are using to change the face of hardware engineering.

Actually, the working definition straight from the Arduino horse’s mouth goes something like, “an open-source electronics prototyping platform based on flexible, easy-to-use hardware and software.” In real-world terms, this essentially means that the Arduino microcrontroller (read: circuit board) is capable of controlling any hardware-powered DIY project you or your creative department can dream up. We’ve used Arduino in many commercial installations, and have never had an Arduino board fail on us during a live activation. That’s much more than I can say for my $4,500 Macbook Pro.

What makes it unique is the size & components. The other main difference is that Arduino, for all intensive purposes, is a blank slate. Raspberry Pi is functionally, a Linux-powered computer.

Long story short, young programming enthusiasts have access to powerful programming tools for less than an expensive set of Legos.

Open Source & DIY: A Perfect Marriage of Technology and Innovation

Emile Petrone of GigaOM poses the question: Will this new DIY tech revolution produce the next Apple? The short and easy answer is, most likely.

Learning has taken a backseat to innovation as young developers learn to build complex solutions with very simple tools.In recent months, Raspberry Pi has received some attention, as developers have been able to get the Android operating system up and running on the platform. In the late 70s, Steve Jobs & Co released the first computing kit, which is essentially what the Arduino and Raspberry Pi boards are offering. Ironically, this new marriage of hardware and innovation is powered by open source technology.

Hardware is doing for this new generation what the Internet did for programmers and tech enthusiasts in the 1990s and 2000s. As the DIY movement continues to explode, more companies are and will continue to make hardware and programming tools more accessible and affordable than ever.

While some analysts are haphazardly pronouncing the death of hardware, programmers & creative technologists are clearly demonstrating otherwise. On one hand, these same analysts do have a point. Hardware prices are dropping, and it’s near impossible to turn a profit these days. On the other hand, that’s not really the point. The point is that lowered hardware prices are fuelling innovation, and that’s what matters.